Join us for an action packed weekend of high quality West African dance and music. Scroll down for tickets and full info on all available workshops and activities. 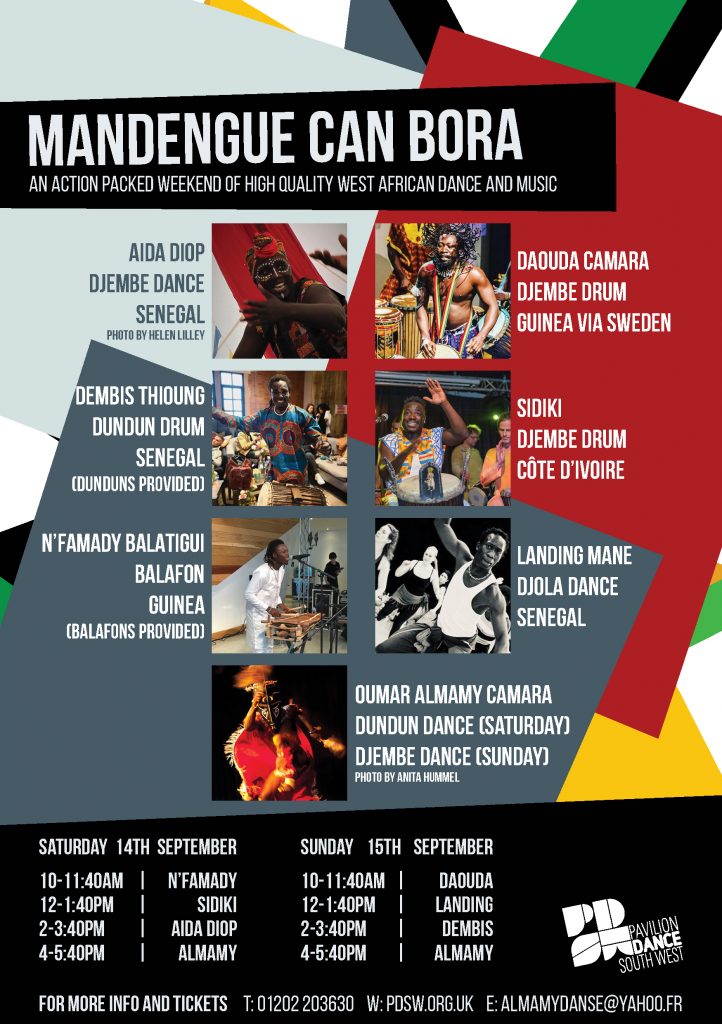 Oumar ‘Almamy’ Camara aims to bring you a taste of the authentic dances and rhythms of Guinea and Senegal, West Africa.

Almamy has been dancing all his life and is steeped in the traditions of Guinean ballet, an explosive and dynamic dance form which has taken traditional dances and woven them into contemporary dance theatre. Almamy has had a distinguished career, having danced with two well respected national ensembles, Percussion de Guinée and Ballet Djoliba, and choreographed for internationally renowned Circus Baobab. Almamy then left Guinea for Senegal and became artistic director of Ballet Bougarabou, and Tamala Drum and Dance in Gambia.

Almamy has been in the UK since August 2012 and has become a key member of the UK’s leading Guinean ballet troupe, Ballet Nimba and teaches drum and dance in community and school workshops across the country.

Aida has an infectious energy with an enigmatic personality and freely shares her knowledge, skills and joviality without holding back.

Born in Senegal, she started dancing Sabar at a very young age. She added djembe dancing to her repertoire and went on tours in Senegal and abroad. In 1997, Landing Mané became her mentor and teacher. In 2010 Aida moved to the UK working alongside Landing Mané participating in various workshops, working at festivals such as Womad and Drum Camp with Ballet Nimba whom she also toured the UK with.

Aida has carried out workshops in many schools and venues and holds regular weekly classes.

Daouda is a professional musician and dancer who started his adventure with ballet and music when he was still a child. He mastered his skills performing with Boca Junior in Matam, city of music. He’s also a well known percussionist. Achieved success and collaborated with various international artists. Daouda performed with the Art Gibami Team in many countries presenting the traditional art of dance and music of Guinea, a colourful and fiery show with live music and spectacular dance.

Currently living in Sweden, he travels all over the world giving unforgivable performances in Europe ( Mama Africa Festival in Italy, Poland with Art Gibami Team), and in Africa every year. He also carries out workshops and teaches music on a regular basis.

Landing is a versatile musician and dancer with innate talent for performing and teaching, and an energy which inspires joy in all.

He has over 40 years of experience as a student, performer and teacher of West African music, song and dance. In his home country of Senegal, he was a director of a group incorporating percussion, song and dance performance which he still continues to lead and work with creativity. Since arriving in London in 1998, Landing has worked as a choreographer, dancer and musician. He also created his own company, Jamo Jamo Arts. He performs at festivals throughout Britain and Europe, and works as an educator and workshop facilitator.

Demba, also known by his artistic name Dembis Thioung, is a mesmerizing master of the dunduns. Born in Dakar in 1986, Dembis was introduced to the art of traditional and contemporary Senegalese musical techniques by following his mother, professional dancer, to rehearsals and performances since birth. He started making drums at a very young age (12 years old) and continued his musical apprenticeship in Senegal.

Dembis came to the UK in 2010. Since then he has been in high demand, both as a performer and a teacher. He currently works for a number of companies, teaches drumming to adults and to children in schools in partnership with Landing Mane.

Dembis is also a versatile independent performing artist and has played live.

N’famady is a balafonist, singer, percussionist, and founder of The Successors of the Mandengue. Born in Guinea, West Africa, N’famady is a direct descendant, and one of the stars of the succession of the Mandengue. N’famady started to play balafon from a young age, learning from his mother and father within the family, then djembe and drums in the traditional ballet groups of Conakry. In later years, he joined various theatres, circus’, and orchestral groups for festival tours across Africa.

A versatile and acclaimed master of West African percussion and traditional instruments, with performance and teaching credits in the UK, Europe, Africa and the Caribbean. Also an experienced and musical collaborator over various genres. Sidiki offers corporate workshops and performance, to companies seeking to build and develop team skills and identity, performing under the umbrella of various large scale companies such as Drum Café, Drum Planet and others. Alongside his work with agencies, Sidiki offers regular workshops and master classes to students all over the world.

Any cookies that may not be particularly necessary for the website to function and is used specifically to collect user personal data via analytics, ads, other embedded contents are termed as non-necessary cookies. It is mandatory to procure user consent prior to running these cookies on your website.